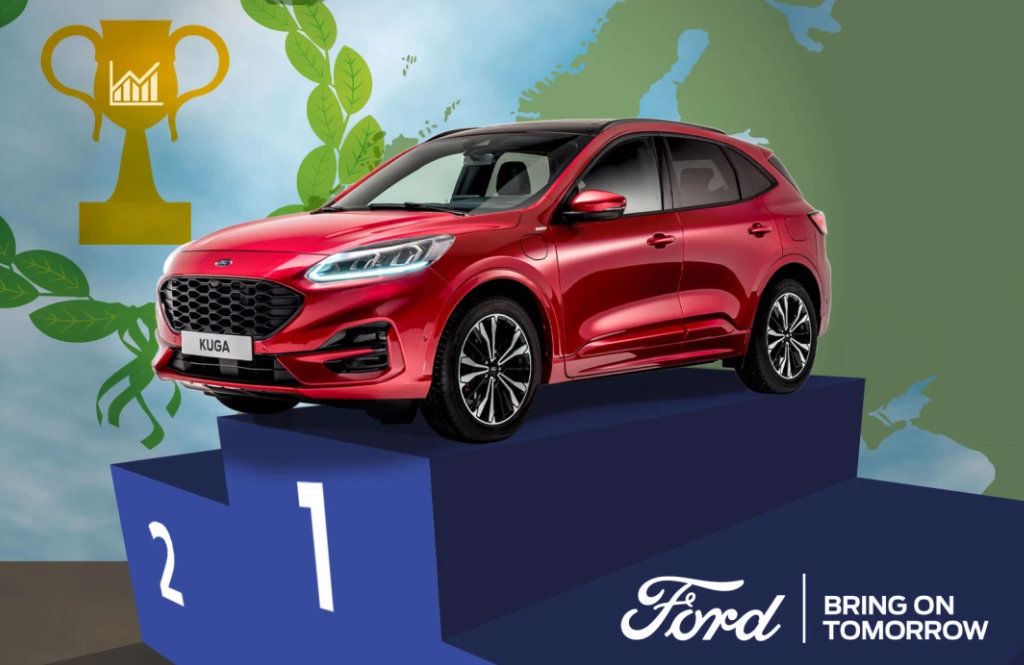 Drivers of Europe’s best-selling plug-in hybrid vehicle (PHEV) potentially each saved in one year the equivalent CO2 emissions of a return trip from London to Buenos Aires, according to the latest data from Ford.

The data also revealed that Kuga Plug-In Hybrid drivers are keen to keep their vehicle charged up, with almost half of all charging events taking place overnight. Short daytime top-up charges of one to two hours were also popular, and Ford anticipates the frequency of charging events by PHEV drivers to increase even further as charging infrastructures continue to expand across Europe.

The Kuga Plug-In Hybrid was the best-selling PHEV of any brand across all European markets in 2021 and outsold its nearest segment rival by more than 17 per cent. 2 Sales of plug-in hybrid and all-electric vehicles accounted for 19 per cent of all new vehicles sold in 2021, compared to 21.7 per cent for diesel-engine vehicles, 3 and more than half of all Kugas sold in 2021 were plug-in hybrid or full hybrid.

“Not every customer is in a position to jump straight from petrol or diesel to a fully electric vehicle. That’s why we designed our Kuga Plug-In Hybrid to offer the best of both worlds, and selling more than any other PHEV in Europe suggests we have the recipe just right,” said Glen Goold, Ford Kuga vehicle line director. “Ford is committed to an electrified future, and cars like the Kuga Plug-In Hybrid are helping customers take that step with us.”

Anonymised vehicle usage data collected by Ford to help understand and optimise the PHEV ownership experience provided insights into how customers are making the most of the Kuga Plug-In Hybrid’s versatility:

Customers are regularly charging their Kuga Plug-In Hybrids – For every 100 drive days there were 71 charging events, indicating that customers are more often than not charging on the days they use their Kuga. In addition, the average state of charge when plugging in was 30 per cent, suggesting customers rarely drive until the battery is depleted and instead keep it topped up to maximise electric driving range.

Kuga Plug-In Hybrid’s driving range gave customers the flexibility to meet their needs – The average distance travelled per day and the number of journeys over 100 km peaked through the summer months of July, August and September, suggesting that customers were able to exploit the model’s petrol-electric hybrid driving range to enjoy their summer holidays and activities.

Customers are taking advantage of overnight charging at home to reduce their motoring costs – Of the 5.7 million Kuga Plug-In Hybrid charging events recorded during the most recent 12 months of data, 46 per cent occurred overnight with the most frequent charging duration being 12 hours or more overnight. In addition to enabling owners to benefit from cheaper rate electricity, the popularity of overnight charging suggests customers are adopting similar behaviours as when charging their smartphones and other devices that have rapidly slotted seamlessly into everyday life.

The second most popular charging duration was between one and two hours during the day, suggesting that Kuga Plug-In Hybrid drivers are also keen to make use of quick top-ups during the day where public charging facilities allow.

The Kuga Plug-In Hybrid was the best-selling PHEV across all segments in 2021 with more than 48,000 examples sold, 2 outselling its nearest segment rival in eight months of the year.

In addition, Kuga Plug-In Hybrid offers the driving range and convenience of a petrol-powered vehicle, while using battery power to supplement petrol performance for enhanced efficiency even when not in all-electric EV Now mode. Fuel efficiency of 0.9-1.3 l/100 km WLTP and CO2 emissions from 21-29 g/km WLTP is better than key rivals and means drivers can leave the vehicle in EV Auto mode knowing it will operate in the most efficient way possible. 4

Drivers can also use EV Later mode to save battery charge for later, giving them full control of how and when to deploy battery power. In addition to charging from an external power supply, the Kuga Plug-In Hybrid can automatically replenish its battery on the move using regenerative charging technology that captures kinetic energy normally lost during braking. Even if the battery is fully depleted, Kuga Plug-In Hybrid offers better fuel consumption than key competitors of 5.2-6.0 l/100 km.4

3 According to data reported by JATO Dynamics, www.jato.com

4 According to Ford analysis.

5 According to Ford-calculated data based on German market.

CO2 emission and fuel efficiency ranges may vary according to vehicle variants offered by individual markets.

The declared WLTP fuel/energy consumptions, CO2 emissions and electric range are determined according to the technical requirements and specifications of the European Regulations (EC) 715/2007 and (EU) 2017/1151 as last amended. The applied standard test procedures enable comparison between different vehicle types and different manufacturers.

View all the latest Promotions from Dan Dooley Ford Centre

View all the latest news from Dan Dooley Ford Centre